Crichton’s influence has been felt too in shows like House and Grey’s Anatomy, both of which are indebted to the ER, a show Crichton created.

You’d be hard-pressed to find a novelist whose work has been more successful on the silver screen and the boob tube. John Grisham gave Crichton a run for his money in the 90s, but Hollywood has strangely left Grisham behind after a string of excellent movies. Only Stephen King can claim a longer and more impressive stretch of success on film.

Consider the 90’s, when Crichton truly took off: Jurassic Park and The Lost World broke records and shot Crichton’s stock into the stratosphere. But there was also Congo, Sphere, Rising Sun, Disclosure and The 13th Warrior (adapted from the novel Eaters of the Dead…which really, when you think about it, is a much better title). 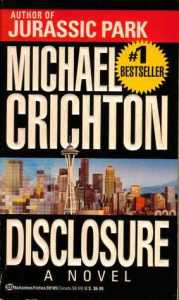 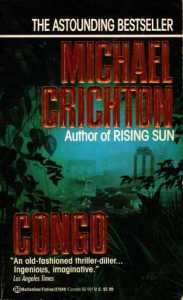 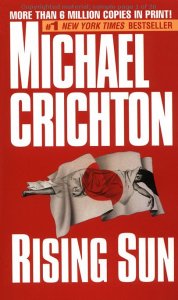 In the wake of all these celluloid dreams, it’s easy to forget that Crichton started his journey in Hollywood much earlier, in the 1970’s, when his early novels were first adapted: The Andromeda Strain in 1971, Dealing in 1972, The Carey Treatment in 1972 (based on A Case of Need), Pursuit in 1972 (based on Binary, a novel Crichton wrote under the name John Lange), and Extreme Closeup in 1973.

Crichton’s first turn as director of a major Hollywood movie, however, came with Westworld (Crichton actually directed Pursuit the year before, but as a made-for-TV movie).

If the plot of Westworld sounds familiar, it should: set in the future, the film follows a group of characters heading to a technologically advanced theme park. In fact, there are technically three parks: Medieval World, Roman World, and West World. In each park, guests get to dress up and act out their personal fantasies within these worlds.

In the case of West World, you get to be a cowboy in the Wild West. You get to carry a gun, go drink in the saloon, get down with an Old West hooker, and have a gunfight at noon in the street. All of the “people” in West World are actually robots, highly sophisticated and lifelike.

And, of course, none of the robots are supposed to be dangerous in any way.

Until something goes wrong…

Cue the heavy music. Sound much like Jurassic Park?

Westworld suffers a bit from the dated special effects, but otherwise the story kicks ass, the directing is excellent, and Yul Brynner is unforgettable as the relentless robotic Gunslinger.

Here, as in so much of his work, Crichton’s concern for how technological advancement outstrips mankind’s ability to control it is on full display.

Next came The Great Train Robbery, a movie that regrettably few remember today. The 1978 classic starred Sean Connery and Donald Sutherland as two Victorian era thieves who plan an ingenuous heist of a shipment of gold running by train from London to Folkestone.

The movie, and Crichton’s novel, are based upon an actual event: the Great Gold Robbery of 1855. The stolen gold would be worth around $1,281,550 in today’s money.

Much of the plot revolves around copying four keys which are vital to the heist. A mold must be made from each key, and two of the keys are kept by two separate bank managers. The remaining two are kept locked away at the offices of the South Eastern Railway. Used together, the four keys will unlock two safes which hold the gold.

There is much to recommend the movie. Fine performances, a cunning story, wonderful Victorian-era set pieces. Connery and Sutherland are excellent, and it is particularly fun to watch Sutherland smuggled onto the train in a coffin.

1981 brought the oft-overlooked little gem Looker. The story of an LA plastic surgeon caught up in a wild scheme of (once again) advanced technology pushed beyond the moral limit, Looker is another classic Crichton story. 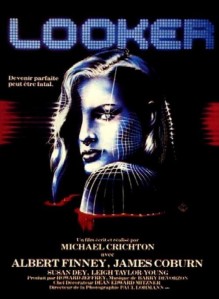 Looker opens with one of Crichton’s best sequences. A fashion model asks her plastic surgeon to make tiny, specific changes to her face and breasts. Larry Roberts (played by Albert Finney) reluctantly agrees. After the surgery, the model is at home preparing for a guest. The doorbell rings.

She answers the door, only to be stunned with a strange flash of light. And…there’s no one there. She returns to her apartment room, and another strange flash of light bursts. Now, oddly, she sees all the windows are open. Her dog, which was at her feet moments before, is now barking from a closet in another room. She goes to the room, which is empty, and lets the dog from the closet.

Another strange flash of light, and now she sees the room is not empty. There is an odd box on the bed where there was nothing a moment before. A final flash of light sends the poor girl reeling toward and open window, and out to her death.

Looker is a bit silly at times (just check out those 80’s glasses on Finney), but it’s a fun movie. The basic plot, in which a sinister corporation creates an advanced light-based technology that puts people into a trance state–and thus can be used to sell products by hypnotizing people through television commercials–is a bit wild but not all that far off. It certainly raises the question of the moral responsibility that comes with greater and greater technology.

I haven’t covered every Crichton movie here. Coma, Runaway and Physical Evidence were also MC projects (Coma, at least, a notable one). But alas, we can’t do everything. If you’ve missed these three movies, they’re worth a viewing. And you can get them pretty cheap these days.

How About a Free Book?

Right now I’m giving away FREE SIGNED COPIES of my two new collections Stranger Calls and The Other Side of the Door. You can sign up for the Goodreads Giveaways below. There is no entry fee and no cost to you. If you are selected, I will personally ship the books to your address.

The Other Side of the Door Giveaway

2 thoughts on “The Forgotten Movies of Michael Crichton”