The Underrated Masterpiece: Stephen King’s “From a Buick 8”

Not that all of the horrors went unglimpsed. In the end, they glimpsed plenty.

Any writer with a career as long and varied as Stephen King’s is going to have at least a couple novels that get overlooked. Some deservedly so. Others, however, get lost in the shuffle and never get a chance to shine.

From a Buick 8 is a slender novel, especially by King’s standards. Published in 2002, it got sandwiched between two brick-thick epics (Dreamcatcher and Black House) and the final three novels of the Dark Tower saga. With all those hefty tomes in the mix, it’s easy to understand how a slim tale about an otherworldly car (round two for King, who wrote Christine in 1983) might have gone unnoticed.

Side note: is it odd that the two novels King wrote about spooky cars were published at bookends to my childhood–1983, when I was born, and 2002, when I graduated high school? Weird. 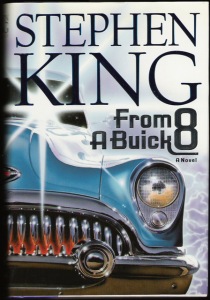 From a Buick 8 takes its title from the Bob Dylan song “From a Buick 6”, a track oft-forgotten from the Highway 61 Revisited album, that begins with the beguiling line: “I got a graveyard woman, you know, she keeps my kid.” Aside from the title, the novel and the song don’t seem to have much in common.

The Buick of the novel is a 1954 Buick Roadmaster, and it is the centerpiece of the novel’s plot. In 1979, a man dressed in black drove the Roadmaster into a filling station in Pennsylvania and asked the attendant to “Fill er up.” Brad, the attendant, asks if he should check the oil, but the man in black says nah, the “oil’s fine.” Heading around the end of the station towards the men’s room, the man in black is never seen again.

Simple enough. The abandoned car is confiscated by State Troop D and hauled back to their barracks, where it is stored in Shed B. A search is made for the driver, but he is never seen, nor is any trace of him ever found. Ditto the Buick, which, as it turns out, is one very odd car.

Curt Wilcox’s boy came around the barracks a lot the year after his father died, I mean a lot, but nobody ever told him get out the way or asked him what in the hail he was doing there again. We understood what he was doing: trying to hold onto the memory of his father. Cops know a lot about the psychology of grief; most of us know more about it than we want to.

While the Roadmaster is the central wheel of the plot, the novel actually unfolds as a series of narrators address the present time (2001) and the past (1979 forward). They do so in response to Ned Wilcox, a teenage boy whose father, Curt, was once a State Trooper out of Troop D. Curt died the year before in an auto accident, run over by a local town drunk.

As it turns out, it was Curt Wilcox who was, more than anyone else, fascinated by and devoted to the old Roadmaster there in Shed B. A young man himself when he first put on the badge, his obsession with the Buick has all the hallmarks of youth, and something more.

But who gives two shits about a beat up old car from a time before Elvis officially became The King?

Well. There’s more to this Buick than four doors and a steering wheel. Much, much more.

For instance, the strange odometer, which reads exactly zero, as if the car has never even been driven around the block. In fact, no one–not the staties in Troop D, who towed it to Shed B, nor Brad, the gas station attendant, who was reading a magazine when the man in black pulled in–has ever seen the Buick move under its own power.

Or how about the fact that nothing sticks to the cars wheels? Pebbles shoved into the tire tread simply fall out, as if expelled, even if placed at the top of the tire.

And how about that exhaust system? Which isn’t made of good old American steel, but of glass.

Of course, none of these oddities come close to the real holy-fucking-weirdness that is the lightshows the Buick puts on from time to time. What Troop D soon discovers is that every now and again the air temperature in Shed B starts to drop. And when that happens, it is best to stay away. Because what comes next are flashing bursts of light that emanate from the car itself like a Chinese New Year firework show. Which might be cool in its own way, but the lightshows sometimes bring something with them: strange objects and creatures not of this world, which are often found in the shed after all the whizbangs end.

And sometimes, the Buick takes. As it did with Trooper Rafferty, who entered the shed alone one day, and was never seen again.

Over the years, Troop D slowly adapted a set of rules when it came to the Buick in Shed B. No one entered the shed alone, not after Trooper Rafferty’s disappearance. A temperature gauge was hung, to let everyone know if the temp was dropping. Goggles to protect the eyes during the lightshows were purchased and hung within reach. And when the temp did change, a guard was posted to wait and watch.

When something came out of the Buick, such as the bizarre, unnatural, bat-like creature found in the trunk after a lightshow, it was dissected and studied. 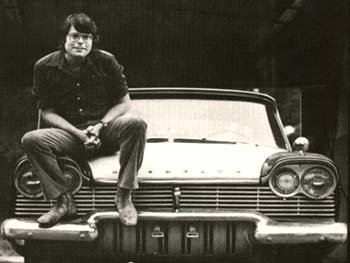 But whatever answers they sought, none ever came. Troop D simply had to learn to live with the mystery of the Buick, observing and speculating, but never really knowing. They all felt its pull–some, like Curt, felt it more than others–but all of them understood there weren’t any solutions there.

They looked at it, hardly breathing. It sat there, as it would sit for all the years to come, while Presidents came and went, while records were replaced by CDs, while the stock market went up and a pair of sky-scrapers came down, while movie-stars lived and died and Troopers came and went in the D barracks. It sat there real as rocks and roses. And to some degree they all felt what Mister Dillon had felt: the draw of it. In the months that followed, the sight of cops standing there side by side in front of Shed B became common. They would stand with their hands cupped to the sides of their faces to block the light, peering in through the windows running across the front of the big garage door. They looked like sidewalk superintendents at a building site. Sometimes they went inside, too (never alone, though; when it came to Shed B, the buddy system ruled), and they always looked younger when they did, like kids creeping into the local graveyard on a dare.

That image, which comes early in the novel, best sums up the book’s theme. Death is a mystery, enticing and yet wholly inexplicable. We are drawn to it in search of answers, in search of meaning, but there is nothing there for us to find. At least not on this side of the vale.

The acceptance of mystery is at the heart of the book. As the novel opens, Curt Wilcox’s son, Ned, starts hanging around Troop D day after day. No surprise then that he eventually discovers Shed B, and what lies inside. The Buick has toned down its lightshows over the years, like a battery losing its juice, and they rarely happen anymore. Still, Ned wants answers, and King structures the novel as a series of monologues told by the members of Troop D. One by one, they add a little to the story, telling Ned the long history of the Roadmaster, and what they know, and of his father, Curt, who was obsessed by the mystery.

The storytellers of Troop D offer the boy no answers. They have learned that some mysteries cannot be solved. Because he is still a boy (eighteen, but oh so still a boy), he can’t accept the lack of conclusions. Much like his father.

And this is what truly drives the book. The push and pull between age and youth, the obsessive desire for answers and the mature acceptance of mystery. The indignation in the face of death, and the resignation that horror is part of the fabric of the world.

Many of King’s novels suffer from overwriting, a fact he himself has observed. As well, King’s desire to explore the literary possibilities of everyday speech can, in some stories, become aggravating. But in many of his works, these tics balance out, and the sheer strength and grace of his narrative line shines through. From a Buick 8 showcases some of King’s finest writing, a fact generally ignored as critics turn their wandering eye towards King’s bigger, more popular and more enduring works.

Perhaps it doesn’t stand with King’s best novels, like IT and The Stand and The Dead Zone. But then it isn’t meant to. One of the delights of reading King is that he so successfully gives the reader a new kind of experience from book to book. There are few similarities between say, Under the Dome and Gerald’s Game.

What From a Buick 8 does offer, though, is everything we look for in a novel: strong characters, an engaging plot, fine writing, and a powerful theme. A good story, well told.

You could do worse.

3 responses to “The Underrated Masterpiece: Stephen King’s “From a Buick 8””