I recently finished for the second time Terry Davis’s short but stunning coming-of-age novel Vision Quest, originally published in 1979 and thankfully still in print today. Simple, elegant, laced with sly humor and unpretentious wisdom, I can think of few novels quite like it.

Which is a bit of a surprise, really. If it were published now, Vision Quest would undoubtedly be printed as a YA novel. It is told in the first person by high-school senior Louden Swain. It addresses drinking, sex, graduation, the closing of youth and the opening of adulthood. At least on the surface, it fits neatly into the YA mold of other current popular novels: The Fault in Our Stars, Me, Earl and the Dying Girl, Eleanor & Park.

But Vision Quest is distinctly different from these works, and not just because it was published in 37 years ago.

For starters, Davis approaches the various “perils of the teenage years” in a way almost unimaginable for today’s YA writers. Consider: over the course of the novel Louden: drinks alcohol, has unprotected sex, is sexually propositioned by 30-year-old gay man, obsessively under-eats in order to drop weight for wrestling, continually harasses a younger, smaller teammate (including putting the boy’s mouthguard in his jock), and must deal emotionally with his parents’ divorce and their subsequent relationships.

In the hands of a YA writer today, any of these events would become the basis of major emotional trauma. Louden would be scarred at best and suicidal at worst.

In Davis’s world, however, none of these are devastating.

Concerning his parents divorce, Louden is understandable sad, but his thoughts and emotions are generally attuned outward, and he is neither devastated nor distraught:

Really, I’m proud of Mom and Dad for having the strength to fight for big-time happiness after twenty years of something that must not have been enough. Christ, it must take guts to break up at the age of fifty, then go right out and find somebody new to love better.

Louden’s sex life is a significant focal point of the novel. He is in a serious and intense relationship with his girlfriend Carla, who lives with him at his father’s house. Carla was previously pregnant and lost her baby. She is older than Louden, nineteen, and significantly more worldly. Much like Judy Blume’s Forever (another YA-themed novel from the 70s), the sex in Vision Quest is vigorous, graphic, and affirming.

Carla, having a few violent feelings of her own, pulled my hair and bit me little hard ones and dug her fingers into me all over. Thank Christ she keeps her fingernails short. I squeezed her till her vertebrae cracked and drove into her with all my abdominal strength, which is a lot even in the off-season. Carla laid her head back and made beautiful animal sounds. I tried to pull out, but she held me and told me to “come, come,” that she was taking pills.

I came and came, all right. I also twitched like a freshly killed snake and gasped like a victim of cardiac collapse. I had never experienced any feeling like that before. It was several universes beyond any pleasure I’d even imagined. Hard as I worked to help her, Carla didn’t come. But she did say she liked the love. Now that we’ve had some practice she comes all the time.

Davis even addresses the kind of underage sex that haunts most parents’ nightmares: It’s junior high and Otto and I are in Belle’s basement watching her big brother and his friends take turns violating her body. She loves it. They invite us to join in, but we’re too embarrassed and scared her mom will come home. We leave and run over to Otto’s and flog our dummies raw.

Belle is in seventh grade.

While it does seem highly unlikely that a seventh-grade girl would “love” an incestuous gang-bang, it strikes me as interesting that, in the end, Belle turns out okay (I can already hear the counter arguments lining up, but I’m going to take Davis at his word).

And it is this that is the greatest difference between Louden Swain and the modern heroes of YA. Louden and his friends never view themselves as victims. They never describe themselves as abused, addicted, scarred, or traumatized. Life never “victimizes” them, and they are never in need of therapy, medication, or some kind of special attention. That Belle turns out just fine is a result I simply can’t imagine a YA writer composing today, not because writers now are wiser or better educated, but because modern American culture fully endorses the belief that we are all victims.

There is a frankness in Vision Quest that is also startling. With so many barriers broken down today, you would imagine that a YA writer would be able to say whatever they wanted to say however they wanted to say it. And while this is true in a general sense (novels like Adam Silvera’s More Happy Than Not are nothing if not frank), most modern YA is surprisingly reserved.

Davis, however, has no problem with the language of teenagers: cock, tits, fuck, come, cunt, etc. Nor does he shy from the crudity of male teenage relationships. As mentioned earlier, Louden repeatedly steals the mouthguard of a teammate and shoves it in his jock. The boys do not hate each other in the least. Indeed, they are close friends.

Such language and antics might make the reader squirm, but I am reminded of John Irving, who once wrote: “If you can’t love crudeness, how can you truly love mankind?”

There is nothing crude however about Davis’s actual writing. In fact, Davis has an uncanny knack for the well-formed sentence, as well as the sharp zing of a literate punchline. His ability to convey the thoughts, feelings and shifting attitude of the teenage mind is on par with the likes of Salinger or John Green, and in many respects he is their master. I would place him more solidly in the ranks of another forgotten American wordsmith, Don Robertson, whose Morris Bird trilogy is an unforgettable coming-of-age masterpiece.

Both Dad and I are pretty sure Shute is going to grind my body into the green surface of our David Thompson High School wrestling mat. We work hard  to put that thought out of our minds, though. I don’t wrestle Shute until after the first of the year, when the weights come up two pounds and I move down from the 154-pound class–where I’m already lean–to become probably the world’s hungriest 147-pounder. I’ve got two weeks yet. We also put it out of our minds because today is my birthday and Dad had our 1941 DeSoto reupholstered in the original mohair. He presented it to me this morning in celebration of my eighteen years and my upcoming high school graduation. Still, he couldn’t forget my impending doom.

There is nothing in this paragraph, which opens the novel, that leaps out at the reader. Nothing that draws attention to itself. It is casual, sturdy, and it flows. Which belies the literary complexity at work. Anything that is so easy to read you feel it can’t be hard to do is likely the work of an expert craftsman (or you’re reading James Patterson).

Consider for a moment how much information is conveyed in that first paragraph: age, geography, upcoming events, the relationship between characters, how the narrator feels about that relationship (the consistent use of we speaks volumes), what is important in these characters’ lives (reupholstered cars rather than, say, a new television), the personality of the narrator (the sly humor is there from the start).

Consider too the balance of those sentences, how one tumbles into another. How the longest sentence of the paragraph is balanced by the shortest. The careful use of commas, conjunctions and prepositional phrases (the reader is never lost, the flow never broken). 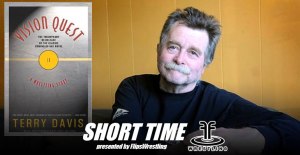 And consider, lastly, the authenticity of that voice. Davis is one of the few writers I’ve ever read who can truly embody a first-person teenage male narration. It is often tried. Very often. But rarely does it succeed (in many ways, I think the general failure comes back to the crudity mentioned earlier…a writer hoping to embody the voice of a teenage boy must, by necessity, fully embrace the crude and embarrassing).

Finally, Vision Quest is unique in that it offers the reader no great conflict at the center of the story. There is no evil government oppressing its citizens, a la The Hunger Games or The Maze Runner. There is no central mystery, such as in Paper Towns or The Face on the Milk Carton. Nor is there even any cheating or betrayal, as in so many countless teenage dramas (Gossip Girl).

It is not that Vision Quest is inherently better than other novels because it lacks a major conflict that upends the life of its protagonist. But it is a testament to the strength of the book that Davis chooses not to include such a plot device and somehow still pulls off a work that is compelling, entertaining and captivating. The only conflict in the book is the upcoming wrestling match with Shute, mentioned in the book’s opening passage, and Davis ends the novel with Louden stepping into the ring for that match. We never see it.

Growing up, Davis seems to be saying, is something that we all must go through. And most of us will have to do so without any major plot device. Without murder, or mystery, or adventure, or magical doorway.

John Irving said Vision Quest was, at the time, the truest novel about growing up since The Catcher in the Rye. It is an unfortunate fate that the latter novel is still so well-known, while the former is hardly read today. Vision Quest looms as one of the finest coming-of-age novels written in the latter half of the 20th century, and it is still relevant now.

Perhaps it is even more relevant here in a world in which we are constantly told that drinking and smoking and fucking will utterly ruin your life. For this novel is a calm and level reminder of the resilience of love, the strength of community, and a faith in young people’s ability to make their mistakes and still find their way in the world.