Wolfman’s Got Nards! The Decline of Boy Movies

“I never had any friends later on like I did when I was twelve. Jesus, does anyone?” — The Body, by Stephen King

When I was a boy, there existed a particular breed of movie within the genre of coming of age stories. For lack of a better term, I’ll call it the Boy Movie, by which I mean that it dealt exclusively with boys rather than girls, and while it was certainly about dawning maturity it was never about sex. The boys were always pre-adolescent. Boys, not young men.

The prototypical Boy Movie was The Goonies, which arrived on scene in 1985. Directed by Richard Donner, the cult classic is still well-remembered today. In fact, legions of fans descend each year upon the city of Astoria, Oregon, where the movie was filmed. The words “Goonies never say die” can be heard on the lips of more than one member of my generation, even now.

All the elements of later boy movies are right there in The Goonies: a rather ramshackle group of adolescent boys, presented with a chance at thrilling adventure, that takes them well outside the world supervised by adults, where they face numerous challenges that test their resilience and bonds of friendship, and eventually return home somewhat wiser and newly aware that their childhood is over.

That’s it in a nutshell.

In The Goonies, this storyline plays out as the Goonies, a self-titled band of misfits, seeks out the treasure of the long-lost pirate One-Eyed Willie. They descend into the underworld of Astoria, following Willie’s map, and eventually discover the old pirate’s ship in a hidden cave. Pursued by hardened criminals, they of course overcome all obstacles, and in the end they snag a few of Willie’s precious cargo and save their parents from having to sell their house.

1987 saw a reworking of this formula in The Monster Squad, gathering together a similar selection of ragged delinquents, this time to face off against Count Dracula, the Wolfman, the Creature from the Black Lagoon, and Frankenstein. While the boys in The Monster Squad don’t venture far outside of town (or deep into its sewer bowels), they reject the supposed safety of parental supervision.

“God damn will you guys SHUT UP? Didn’t you hear a word I said? These guys are dead, get a clue! Something’s out there and it’s killing people! And if it’s monsters, nobody’s going to do a thing about it except us!” — Sean, leader of The Monster Squad 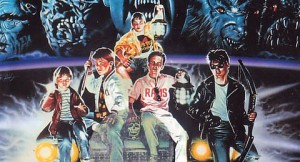 Rejecting parental supervision is at the heart of the Boy Movie. This is seen most acutely in the 1986 Rob Reiner film Stand By Me, adapted from the brilliant novella by Stephen King.

At the start of the movie, young Ray Brower has disappeared. Our heroes, Gordie, Chris, Teddy and Vern learn that Brower was hit by a train far outside of town, and that his body has yet to be discovered by any adults. If they hurry, they can reach the body first and possibly be declared local heroes.

It never really crosses the boys’ minds to tell their parents. In fact, they lie to their parents in order to free themselves up for their adventure. Each boy claims to be staying overnight with another, and their parents never question it. The boys load up on supplies and “light out for the territory” (as Huck Finn would have put it), following the train tracks in search of poor dead Ray Brower.

It is this particular quality that has changed in decades between the 1980s and our current time. The advancement in technology (no cells phones in these boys movies) as well as the bizarre encroachment of parental paranoia have dramatically altered the landscape of American childhood.

Addressing this issue in the introduction to his phenomenal novel Summer of Night, Dan Simmons writes: “The worlds between kid-life and adulthood were simply separate then. During the course of Summer of Night, each of the kid characters is forced to face some terrible aspect of the adult world–raw sexuality, the death of a friend one’s own age, violence, loneliness, drunkenness–but in each case the kids of Elm Haven summoned strength from each other and from the separate place and secrets and silences that were childhood itself.”

Simmons’ novel is set in the 1960s, an era when childhood still thrived.

Today, it is those very separate places, secrets and silences which no longer exist. Adults, spurred by endless reports of overblown dangers, have shrunk the world of childhood to the point of non-existence.

This is the reason, I imagine, that JJ Abrams sets his own Boy Movie, Super 8, not in our post-9/11 era (even though the movie was released in 2011), but in 1979. The 1980s and early 1990s are the last time periods in which children could reasonably expect some level of freedom from their parents.

As a side note, Super 8  is also noteworthy for the way Abrams centers the movie around a girl rather than a purely male cast. The major instigator, the individual who truly drives the movie, is Alice Dainard (played by Elle Fanning).

Can we even envision a Boy Movie set after 2000? You might argue that we can, but what example would we point to?

The truth is that Hollywood has largely abandoned this sub-genre in favor of telling coming of age films that deal with older protagonists. The sexual exploits of teenagers, no matter how unrealistic, are a Hollywood wellspring that never goes dry, whereas the idea that a group of pre-teens could escape their parents long enough to learn valuable life lessons is considered so preposterous as to not be worthy of a second thought.

It’s hard to imagine where this genre will go. If the necessary cultural elements of the Boy Movie simply vanish after 1995, then perhaps it will limp away and die. It is not a genre such as the World War II movie, which seems to have unending historical appeal. Nor does it possess the same kind of elasticity as that other nostalgic and sentimental genre, the Western, which can be reinvented time and again (consider Tarantino’s Django Unchained and The Hateful Eight).

The Boy Movie, rather, is a narrow genre with more limited appeal. If there are no boys growing up any longer who have experienced genuine freedom during childhood, it’s hard to imagine there will be a future audience capable of connecting with these stories.

Maybe Goonies never say die. But that doesn’t mean they don’t get old and fade away into the sunset.

Movies and Television
coming of age, Stand By Movie, Super 8, The Goonies, The Monster Squad

3 responses to “Wolfman’s Got Nards! The Decline of Boy Movies”