Years after his death, Michael Crichton is still dominating American culture. Jurassic World  shattered records at the box office upon its release, demonstrating that Crichton’s dinosaurs-run-amok brainchild still holds wide appeal. HBO’s remake of Crichton’s early film Westworld  was met with great fanfare, both from critics and audiences. And in 2017, a newly-discovered Crichton manuscript will be making its way to bookshelves around the world.

In spite of his stunning success (he is the only writer to ever have the #1 book, movie and television show released at the same time–a feat he managed twice), Crichton has often been undervalued as a writer. Time and again, critics poo-pooed his prose style, attacked his character development, dismissed his plotting, and denied him a legitimate place in the Club for Great American Literary Writers.

Crichton’s prose certainly doesn’t dazzle the way, say, Gabriel Garcia Marquez’s does. Nor do his characters shimmer with life in the same fashion as the characters of John Irving or Andre Dubus. But every writer must be taken on their own terms, judged for how well they accomplished what they set out to do, not for failing to achieve something they never attempted in the first place.

Crichton never tried to write mainstream literary fiction. The deep, brooding narrative style of Henry James wasn’t his forte. Dismissing Crichton as a literary hack, however, is grossly unfair. Furthermore, it ignores the distinct lineage Crichton situated himself in.

While he became known as the father of the modern techno-thriller, Crichton’s major influences are squarely 19th Century classics. Novel after novel, Crichton reworked tales from the Victorian period and reintroduced them to the modern world. He was a wickedly intelligent and dedicated reader, one who studied past narrative forms and understood precisely what he was doing.

To understand Crichton’s work–and why remains so enormously popular–one has to look past the science and instead toward the fiction, primarily the fiction of earlier eras.

While it may seem an unlikely comparison, The Andromeda Strain

owes a great deal to that 19th Century thriller by HG Wells: The War of the Worlds

It is true that Wells’ short novel deals with the invasion of Earth by super-intelligent Martians who destroy a good deal of the planet with their machines and death rays. But this is only the uppermost level of Wells’ tale. To fully understand the novel, we must recognize that it is primarily a metaphor (as are all of Wells’ best works, from The Time Machine  to The Island of Dr. Moreau  to The Invisible Man).

The War of the Worlds,  aside from being an inventive sci-fi story, is also a mediation on the clash of civilizations and the effects of evolution and natural selection. It is also a wily admonishment against valuing pure intelligence over more humane attributes (the Martians are vastly smarter but also utterly vicious and cruel).

If Wells’ main concerns are primarily metaphorical, Crichton’s are more practical. Crichton was always a writer more fascinated with actual science and its implications, more Jules Verne than Ray Bradbury. Though he does away with Martian death rays and interplanetary space cylinders, he keeps intact a major conceit: the inability for life to remain unaltered on another planet. 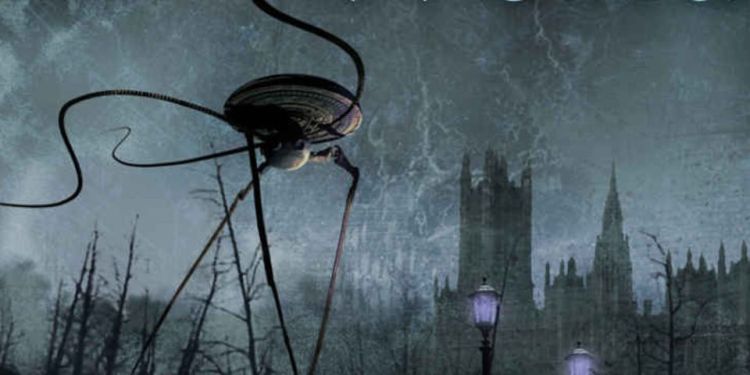 Wells’ Martians and Crichton’s alien microbes both succumb to natural selection. In The War of the Worlds, the Martians die from infection. In The Andromeda Strain, the virus mutates, evolves and becomes benign.

is classic Crichton: a heady mix of science-fiction, adventure and horror rolled into a single storyline. Set deep within the titular Congo rain forest, the novel follows a group of scientists in search of the fabled Lost City of Zinj.

Victorian era Europeans were greatly enamored with exploring the “blank spaces on the map”, primarily within the so-called Dark Continent. Not surprisingly, writers of the day exploited this adventurous fervor by penning grand tales of exploration. None did this better than H. Rider Haggard, whose stunning King Solomon’s Mines

served not only as Crichton’s roadmap for Congo, but also as the basis for the Indiana Jones tetralogy.

King Solomon’s Mines  was published in 1885 and was the first adventure novel set in Africa. The story opens with its hero, Allan Quartermain, being asked to led a search party into the heart of the continent in search of a man who has gone missing while seeking the fabled mines of the Biblical king. Quartermain agrees, asking in return that, should they discover the mines, he receive a portion of the treasure.

The novel traverses a good deal of African geography, from harsh deserts to lush oases. Haggard stuffed the story with lost tribes, escape by lunar eclipse, hordes of gold and jewels, maps drawn in blood, and violent warfare. Written on a bet and rejected by numerous publishers, King Solomon’s Mines  would become a bestselling sensation and usher in a whole new genre: Lost World novels, spawning works like Arthur Conan Doyle’s The Lost World,  Edgar Rice Burroughs’ The Land That Time Forgot, and HP Lovecraft’s At the Mountains of Madness.

From Haggard, Crichton clearly lifts many tropes: a lost city deep in the African subcontinent, a forgotten “tribe” (in Crichton’s case, of homicidal gorillas), and riches beyond imagining.

Jurassic Park and The Lost World

and The Lost World

. Inspired by H. Rider Haggard, Doyle’s novel was one of many in the early 20th Century to envision a Lost World hidden from the ravages of modern man.

In Doyle’s case, this Lost World was a vast plateau deep inside the Amazon where prehistoric dinosaurs still thrived. Featuring Doyle’s other great character (and complete opposite of Sherlock Holmes), Professor Challenger, The Lost World  includes, in addition to dinosaurs, lost Amazonian ape-men, a forgotten tribe, bloody warfare, and diamond riches (sounds a lot like Haggard, doesn’t it?).

Crichton was a great fan of Doyle’s. Both men were doctors and men of science. Both enjoyed writing “ripping yarns.” Writing in his introduction to the Modern Library Classic edition of The Lost World,  Crichton says:

“The story Conan Doyle wrote was a great success in its day…Just as Sherlock Holmes set the standard—and in some sense established the formula—for the detective story ever since, so too has The Lost World set the standard and the formula for fantasy-adventure stories since that time. The tone and techniques that Conan Doyle first refined in The Lost World have become standard narrative procedures in popular entertainment of the present day.”

follows a group of students who use advanced quantum-mechanics technology to travel hundreds of years into the past in search of their mentor and teacher, who has used the same technology and become stuck in 14th Century France.

Mark Twain had no knowledge of quantum mechanics (which wouldn’t be discovered or described until the work of Albert Einstein demolished our understanding of physics), but his 1889 novel A Connecticut Yankee in King Arthur’s Court

Stealing a page from Washington Irving’s Rip Van Winkle,  Twain’s 19th Century Hank Morgan is hit on the head and magically awakes in another time: 6th Century England. In fact, he finds himself in England ruled by none other than the mythical King Arthur. Morgan, an engineer in his own day, immediately realizes that he is, thanks to his understanding of 1300 years of technological advancements, more or less the smartest person in England. With this knowledge, he sets out to improve the fabled court with his scientific knowledge.

Twain was a humorist, and his novel is filled with amusing twists and turns and ridiculous encounters. Crichton, of course, is a thriller writer, and as such his novel focuses far more on action, tension and danger.

Both novels, however, deal squarely with how out-of-place their main characters are when transported to far earlier time periods. In each work, characters must learn to adjust to the wholly different cultures and are often at a loss when stuck in situations where they don’t have access to their own “modern” technology.

Crichton mined classic works deeply throughout his career. In addition to the works above, his novel Eaters of the Dead  is an entertaining and well-executed refashioning of Beowulf, and his posthumous novel Micro  retells Richard Matheson’s jaw-dropping novella The Incredible Shrinking Man.  Sphere  has numerous echoes of Verne’s 20,000 Leagues Under the Sea.

Cribbing from other writers is a natural part of writing. There’s nothing unusual about it. But it strikes me as a bit disingenuous to praise a literary writer like Charles Frazier for using The Odyssey  as inspiration for his fine novel Cold Mountain  while ignoring entirely the manner in which Crichton recycled classic literature throughout his career.

Crichton was a sharp writer and a man who clearly understood precisely what he wanted to achieve. Given that he looked back to and closely studied popular literary forms of the past for guidance, is it any wonder that his own novels were so wildly successful?