New Line Cinema finally released the teaser trailer for the remake of Stephen King’s 1986 blockbuster horror novel IT, and what a trailer it is. There’s a fair amount of carping going on around the internet, but let’s be honest here: this is a spooky preview with obvious production values.

It certainly inspires hope that this two-film project will deliver in ways that the original made-for-TV mini-series didn’t. Of course, it also sets up potential disappointment. King is the most heavily-adapted writer of his generation, but there are only a smattering of movies made from his work that are truly worth watching.

The fact that IT  is considered by many fans to be his finest work (this fan included) makes the stakes that much higher.

Regardless of how well crafted Andres Muschietti’s version is, one thing strikes me as certain: it won’t end up haunting the dreams of an entire generation of American children.

To be fair, very few movie monsters do. Freddy Kruger has a special place, and for some Jason Vorhees might actually make the list. But no on-screen baddy seems to be as well-remembered as Tim Curry’s chortling clown, Pennywise. In the nightmare department, everyone else is running a distant second.

(Don’t believe me? Pause and consider the ridiculously over-the-top reactions to last year’s Clown Sightings around the country…in my neck of the woods, shooting someone dressed like a clown was considered totally within the bounds of reason).

It’s true that Curry’s performance is one-of-a-kind, and that he rightly deserves credit for a wickedly good portrayal of King’s ultimate villain. But the reason Curry terrorized an entire generation isn’t simply because he gave it great performance.

It’s because he did it on television.

Here’s a common story from 1990, when the mini-series aired: a seven-year-old boy wants to see the new Stephen King show on TV. His parents are worried that it will be too scary, but hey, it’s on ABC, so just how freaky can it really be? It’s definitely on too late at night, but whaddayaknow, it can be recorded on a VHS tape  and the kid can watch it during the day while Mom and Dad are at work. Problem solved.

Nearly every kid of my generation that saw the mini-series no doubt has a similar story. Sure, this was horror,  but it was on ABC  for Christ sakes. It couldn’t be that scary.

Yeah, well…boy were we wrong.

IT  reached roughly 20 million viewers per episode, and that was just in its initial run. Then came the reruns, which allowed even more kids to come across good old Pennywise on the boob tube year after year. That damn clown sunk deep into the cultural conscience, so that now even people who never saw the movie know what you’re talking about.

I am certain that the 2017 version, with its updated visual effects and rated-R approach, will be a far darker and scarier adventure than its 1990 sibling. But I am also certain that very few ten-year-olds (let alone seven-year-olds) will be watching it on the big screen. 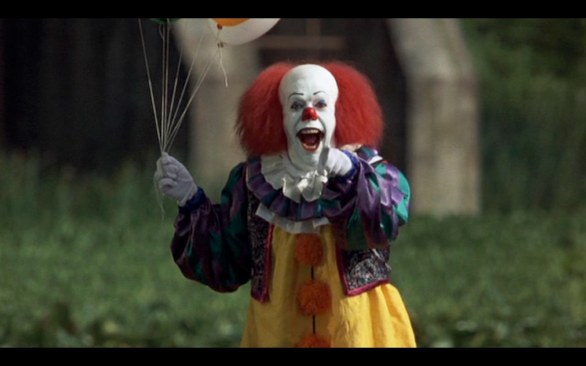 This new Pennywise–by all accounts successfully played by Bill Skarsgard–will no doubt terrify, but his reach will be limited. King played into a deep vein of distrust by masking his monster in clown paint, but parents today are far more wary of clowns than they were in 1990. It seems unlikely they’ll be letting little Billy and Suzy stream this one at home either.

I for one am wishing the new adaptation well. And I think giving us a truly adult movie experience was absolutely the right choice.

But when we lay our heads down to sleep, it will still be Tim Curry who haunts our dreams.